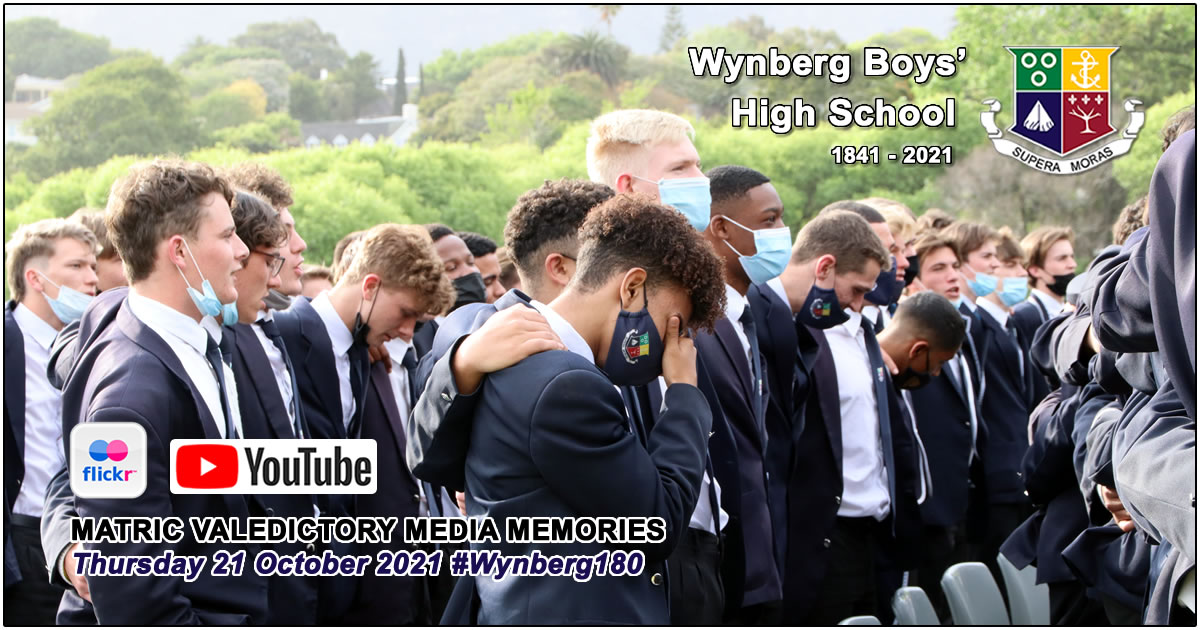 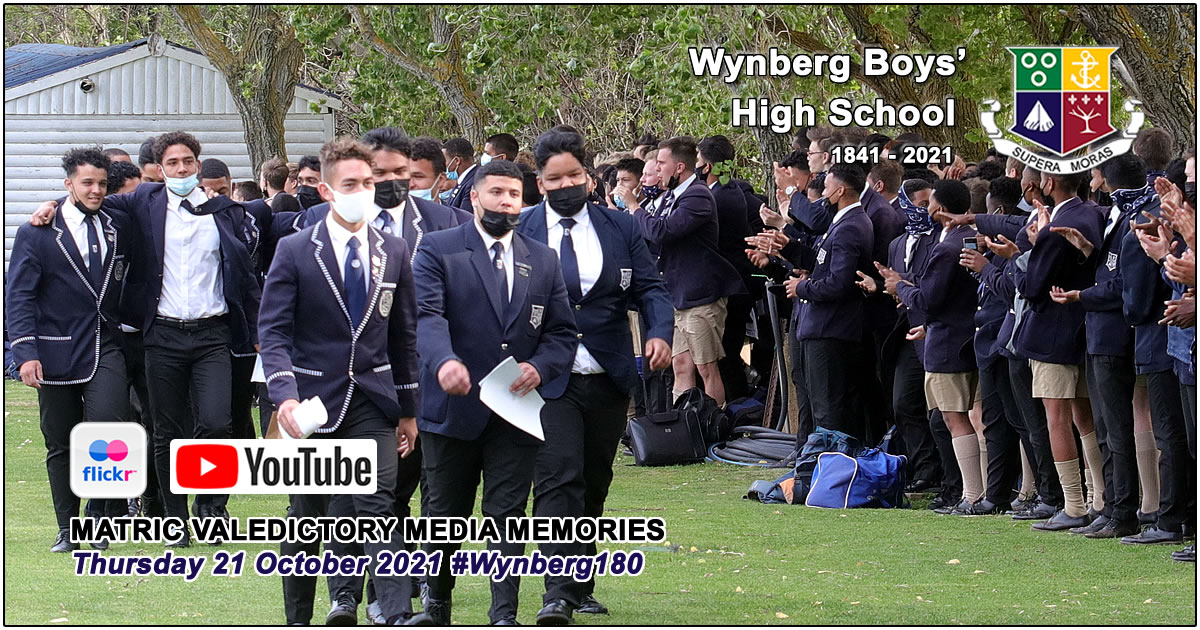 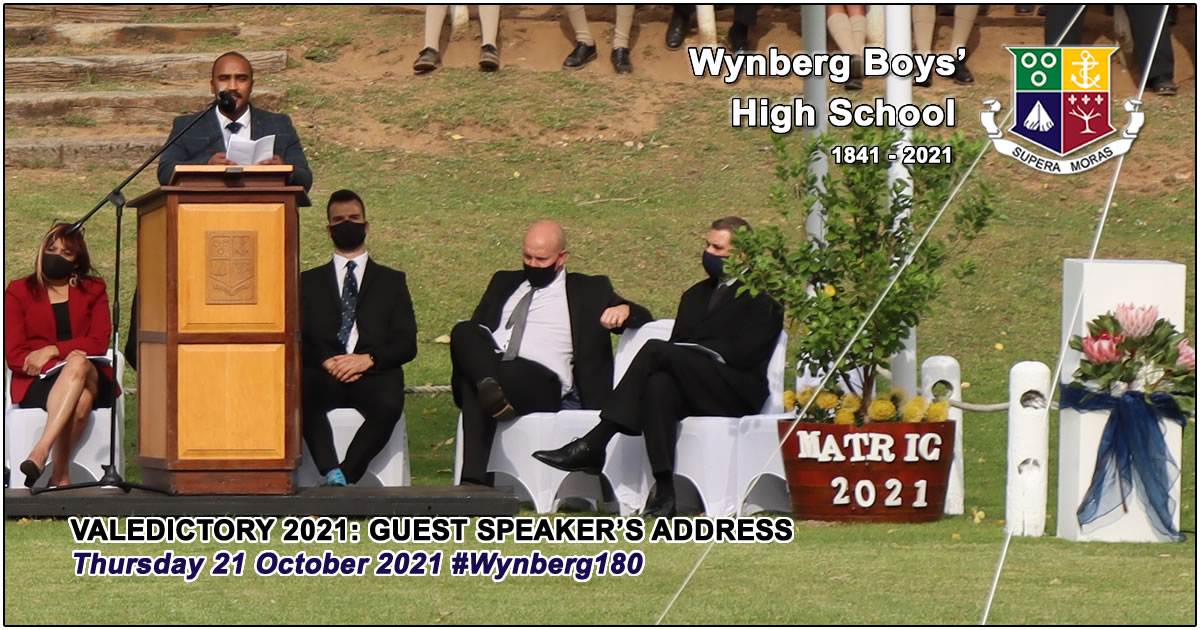 1. Tolling of the Bell: Josh Brown

2. Procession of Matrics: To Build a Home – Cinematic Orchestra

6. Prayer for the Matrics: Mika-eel Rylands

15. Vote of Thanks: A call, adapted from the Preamble to the Constitution of South Africa – Mr Larry Moser, Deputy Headmaster

Gerald Abelsohn
First awarded in 1965, the year he was a prefect.

Bob Adshade
Bob was a pupil at both Wynberg Boys’ Junior and High Schools from 1943-52. He was a bugler in the highly successful High School Band and after matriculating set up a successful photography business, being responsible at one time for our annual school photographs. He died tragically in 1999 and his widow and son Robert, also an old boy of Wynberg, have presented the trophy in his name.

Wade Bertram
Wade was killed in an accident during his matric year (1990). While not a prefect, he was a good leader who set a fine example to the rest of the matric class and the school.

Seymour Casper
Played 1st XV rugby and represented Western Province in 1972.  He represented South Africa at the Maccabi games in 1981 in Israel.

Caxton
Caxton Booksellers have sponsored this prize since 1963.

William Clegg
Headmaster from 1919-47 – the school hall is named in his honour. Clegg Bursaries were first awarded in the 1970s.

Martin Cleveland
Matriculated in 1990 as Dux of the school but died in a motor accident before he received his final matric results.

Stephen Doidge
Stephen was Valedictorian in his matric year (1990). He has taught at the school and is a past President of the Wynberg Old Boys’ Union.

Epworth Music Society
This prize was first awarded in 1960.

C.A. Friedlander
Cecil Friedlander, one of four brothers to have links with Wynberg, began the family’s support when he was enrolled in 1919. He perished during World War II and the Inter-House Shield was donated in his memory.

Friedlander Family
Alfred Friedlander served on the School Committee while his sons Ian, Cecil, Richard, and Frank were at the school. The next generation was schooled under the headmastership of their cousin Arnold Lorie.

Vincent Grainger
Vincent was Head Prefect in 1934, going on to study engineering at UCT, earning his Ph.D. His career as an engineer in the City Council was interrupted by his service in North Africa during the war. He served the City of Cape Town, was Scientific Advisor to the Prime Minister of Rhodesia, and Dean of the Faculty of Engineering at UCT. He passed away in 2013.

David Heidmann
David had cystic fibrosis and missed a good deal of school because of extensive medical treatment. Nevertheless, he continued to be active in school life and matriculated in 1998. He passed away in 2007.

Bunty Joubert
Bunty was the school secretary from 1973 until her fatal illness in 1996. She was a second mother to pupils and staff alike, fiercely proud of, and loyal to the school and “her boys”.

J.S. Labuschagne
Fanie came to the boarding house from northern South West Africa (Namibia). He was an unbeatable debater with a broad general knowledge. He matriculated in 1949 and became a lawyer, rising to the level of Public Prosecutor in Rhodesia. The prize was donated in his honour by Neil Jowell, a friend and fellow debater.

Bill Lennox
“Shorty” taught Maths, Science and Biology from 1950-80, coached athletics and rugby, ran the Maths Department, but is best known for his training of the Cadet Band which won interschool competitions for 28 consecutive years. He retired as Senior Deputy Principal in 1980 and died in 1991.

D.F. Marais
Teacher – known as “Choker” for his somewhat unconventional approach to discipline. Head of Afrikaans Department. Revived the defunct Cadet Corps at the outbreak of World War II (it had been disbanded in 1930). He died in 1949 while still teaching at the school.

Jim Mathew
Jim matriculated in 1939 as Head Prefect. He returned in 1955 as a Biology teacher and 1st Team Cricket coach and became Deputy Headmaster until his retirement in 1984. He died in 1995. His father matriculated as School “Captain” and Soccer Captain in 1907.

Alf Morris
Alf was a teacher at Wynberg Boys’ High for 42 years from 1947 to 1988. He taught English and Geography, coached cricket and rugby, ran the Mountain Club and was Master in Charge of Sport as well as Head of the Geography Department when he retired. He also ran the Littlewood House Hostel from 1949-57. He passed away in 2010.

Pippa Richardson
Pippa is the wife of Keith, 13th principal of WBHS from 1999 to 2015. She was well-loved by all “her boys’ and took a personal interest in every member of the Wynberg family, from schoolboys to staff members and their families. She served with an untiring spirit in every activity at the school, particularly on the Ladies’ Association.

Rotary
The Good Fellowship Award has been sponsored by the Wynberg Branch of Rotary since 1985.

Eric Tasker
H. Eric Tasker taught History from 1934 to his retirement in 1967 but often helped out as a relief teacher thereafter. He was a very well-respected and dedicated coach of rugby and athletics, and through the prefect system he developed young men into fine leaders.

David Templeton
David was an excellent violinist who matriculated in 1961. After school he became a Presbyterian Minister.

F.G. Thorp
Freddy was a Science master (1928-68) and Deputy Principal whose duties included running the Book Room. He started the Debating Society and ran it for 25 years. He also instituted the cross country race and ran the annual athletics meetings.

Wynberg Old Girls’ Union
This prize was awarded for the first time in 2004.