We, the young men, the staff and the community of Wynberg Boys’ High School respect and honour the inherent dignity of every human being and cherish all forms of life on this planet.

To that end we pledge this code of nonviolence.

We pledge to make this school and its environs a place of safety, security and peace and we pledge that all who represent the school are ambassadors of this code.

Racism is a belief that one race or ethnicity is superior to other races. It can take many forms, such as jokes, comments that cause offence or hurt, name-calling, verbal abuse, harassment and intimidation that inflames hostility towards certain race groups and making an instantly formed judgment about someone because of their race or culture. It can result in persons being disadvantaged or excluded from accessing services or participating in employment, education, sport or social activities.

Racism occurs on a day to day basis and happens within our homes, workplaces, streets and places of leisure.

Wynberg Boys’ High School believes in the power of diversity and strives to build a balanced and inclusive school community. It is committed to eliminating all forms of racism and racial harassment within its school community.

Recognises that South Africa continues to experience racism and discrimination

Recognises that everyone deserves to be treated with fairness, respect and dignity

Rejects the use of language, religion or culture that advances racial discrimination

Racism has damaging effects on individuals, families and communities and the learning and working environment.

Racism can adversely affect educational outcomes, individual happiness and self-confidence, school climate, cultural identity, school and community relations and student behaviour. It has been linked to diminished morale, lower productivity and an increase in incidents of stress and absenteeism. Specifically in the learning environment, it may result in lower levels of education achievement and lower rates of participation in post-school education and training.

Wynberg Boys’ High School aims to promote a clear understanding in the school community of what racism is and how it can be prevented and reduced.

This aim is achieved through three objectives:

1. Creating awareness of racism and how it affects individuals and the broader community;

2. Identifying, promoting and building on good practice initiatives to prevent and reduce racism, and

3. Empowering communities and individuals to take action to prevent and reduce racism and to seek redress when it occurs.

Racist incidents may include but are not limited to the following actions perpetrated on the basis of race or culture:

1. Jokes or comments that cause offence or hurt;

5. The expressing of prejudices or deliberate misinformation regarding racial or ethnic distinctions;

7. Refusing to cooperate with others as a result of their race or culture;

Wynberg Boys’ High School will record, investigate and act upon racist incidents and will deal with such matters in a swift, efficient and fair manner.

Victims of racism and discrimination will be shown understanding and be given reassurance and support. 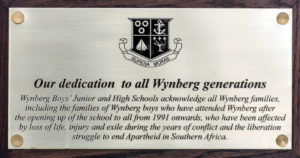