Friday 25 May 2018: Newly appointed 1st team coach, Paul Phillipson plans to bring a wealth of playing experience and understanding in coaching to the Wynberg Boys’ High School Cricket fraternity. In anticipation of starting this new role at Wynberg Boys in August, Phillipson says:

“It will be another major coaching challenge for me in my long cricket career, but I must genuinely say it’s something I have dreamt about. Wynberg is a top, top school in every way and is recognised as such across the cricketing world. There certainly seems to be a solid structure in place with young, aspirant coaches operating throughout the age-groups.

I have massive respect for Andrew Wylie and the expertise he has brought as Director of Cricket. There’s no doubt we will work well together. My aim is to develop improved skills within the squad of 1st team players, to groom better people in a holistic way, and to make Wynberg a school that everyone wants to play against. Can’t wait to get started!”

A professional cricketer since age 19, Paul played for Sussex County Cricket Club from 1970 to 1986.

“It does seem a long time ago when I began in county cricket as a medium pace seam bowler and always a tail-ender. But the game was evolving, so my skill-sets had to adapt to that of an all-rounder. In my final years at Sussex, I played as an impact batsman and a specialist fielder in the short-format games. We all worked really hard at our fielding and particularly catching, where of course every chance mattered. It meant a lot to me when I  became the team’s leading slip fielder, trying to hold on to stinging catches from our two great fast bowlers, Imran Khan & Garth Le Roux, the latter a legendary WBHS old-boy.”

Paul’s general athleticism and game-appreciation at that level set a platform for a distinguished and mainly successful career in coaching and later in cricket administration. In all Phillipson played almost 400 games for the Sussex 1st team: scoring 5200 runs, taking 250 wickets & 200 catches.

“At Sussex, we developed an attacking attitude within the club, to best complement our world-class overseas cricketers. The aim was always to win matches and trophies, which we did. The squad was youthful in approach, often carefree, but we also wanted to win playing attractive cricket which entertained people and gave a buzz. With all the teams I coach, this is what we build towards.” 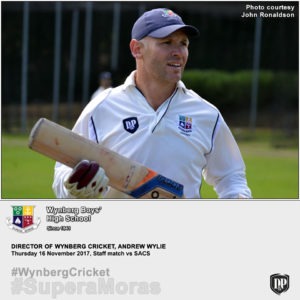 Paul started coaching shortly after qualifying as a teacher at Loughborough University. In 1975 he made his way to Cape Town for the first time and started a six month stint at Plumstead High School as their “pro-coach” during the Sussex off-season.

“In those days professional cricketers had to find work in the winter. My mother had been born in Cape Town many years back, so I always wanted to find a way to visit. It didn’t take long for me to appreciate the full beauty of the city and the Cape suburbs, and of course the brilliant summers. Through cricket, I have developed so many friendships with people from all backgrounds in Cape Town. I also need the sun and wind on my back, so much more than the icy chill of English winters!”

Following those seasons at Plumstead, Paul was invited by Tony Greig’s media company to coach young players in Sydney as part of the 1977 launch of the revolutionary World Series Cricket.

“I didn’t want to leave Plumstead, but here was a genuine chance of a lifetime to earn a living on the other side of the hemisphere. I wasn’t disappointed because it was such an amazing time to be at the cutting edge of cricket development. The clinics that we ran in Australia were the best of their kind ever held, believe me! The experience was awesome and really helped me to shape a more creative coaching style. It only lasted for about four months so it was back to Cape Town.”

In 1978, Paul moved to Bishops as their “pro coach” and spent a very industrious three seasons working at both the College and Prep. Around this time he became a married man and with his wife Adell, started their family while still traveling back to Sussex every six months.

Bishops became Paul’s full-time employer when the family of four returned on a permanent basis in 1986 following the decision to retire from 1st class cricket. For eight years he held the position of Sports Administrator, while also being the school’s cricket professional, a classroom teacher and assistant house-master. He also held the position of manager/coach of the WP u19 squad for the then Nuffield Weeks (now the Coca-Cola Week) of 1987 & 1988.

“That period at Bishops was tough but enjoyable. We had our third child and were setting up a new family home.  The time I spent coaching was full of talented individuals and the school’s cricket was thriving.”

Professional cricket beckoned once again in 1994 when the job of assistant coach at WPCA became available. Paul was appointed and what followed was a 22-year link with Newlands Stadium and the game at Provincial level. Working initially as the coach of the WP “B” squad and being able to tap into the wisdom of Duncan Fletcher, he subsequently held the mantle as Amateur Coaching Manager.

The WPCA’s retirement age of 65 was reached in early 2017 and Phillipson moved off from the Newlands community. With his wife, he took some time-out to visit their grandchildren in the UK and to have a decent holiday. Within weeks of their return, he was back coaching the UCT 1st team and doing what he is most suited to and what he enjoys the most.

“The UCT students were great to work with and I thoroughly enjoyed what was a successful season, obviously affected by the Cape drought and the suspension of the league. However, they finished on a real high by winning the WPCA T20 final in style which gave me great satisfaction.”

Paul and Adell Phillipson have lived in the Southern Suburbs since 1986; their son Ross, now an officer in London’s Met Police, attended WBHS for several years; strong links remain.

WBHS looks forward to welcoming the Phillipsons to our Wynberg Family, and an exciting new chapter for Wynberg Cricket.

A #WynbergMedia report with thanks to Messrs Phillipson & Wylie.