Friday 26 March 2021: This week in our series of Wynberg 180 Reflections, we publish a short feature article from the 1975 School Magazine in which documents record an earlier incarnation of a school in Wynberg than our own.

While the Wynberg Free School might well have been a progenitor of the Wynberg Established School from which we trace our unbroken 180-year history, its closure in the late 1830s would likely have highlighted the need for a school in the expanding community of the time, triggering the chain of events that brought our founding Headmaster, Mr John McNaughton, to the Cape from his native Scotland.

What is certain, however, is that formal education has been established in Wynberg for a full 200 years and that the Wynberg Boys’ School (Junior & High) can take pride in having remained at the heart of that community since its inception.

We all know that the Wynberg Boys’ School (now the High and Junior Schools) was founded in 1841 and is the second oldest school in the Republic. But not many people know that there was a school in Wynberg, known as the Wynberg Free School, some twenty years earlier.

Mr Roger Goodwin, a former WBHS pupil and now head of the History Department at Selborne College, East London, unearthed an interesting relic of that earlier school – its account book and register – among the records of St John’s Church in Bathurst. Mr Blackbeard visited the church, inspected the volume and asked that most enthusiastic of Old Boys, Mr Townley Johnson, to photograph several pages. An extract from Mr Goodwin’s letter reads as follows:

“While conducting a party of boys on an historical excursion in the Bathurst district I came upon an old volume amongst the records of St John’s Church in Bathurst. It is entitled ‘The Account Book for Wynberg Free School’. It is dated September 22nd, 1823, and states that the school was opened on 5th November, 1822 under the direction of Chaplain William Wright. The name of the schoolmaster was Nicholas Gilbie (or Gillie?), who apparently moved to Bathurst to establish a school there and continued to use the same volume for his account book and register.

“I scanned the list of names of the Wynberg period to see if any old Wynberg names were present … but one name that did seem to ring a bell was that of Titterton. There were, of course, several common names that could have cropped up anywhere.

“It occurred to me that members of old Wynberg families might like to know of the existence of this document even to the extent that they may come to visit St John’s when passing through this area.” 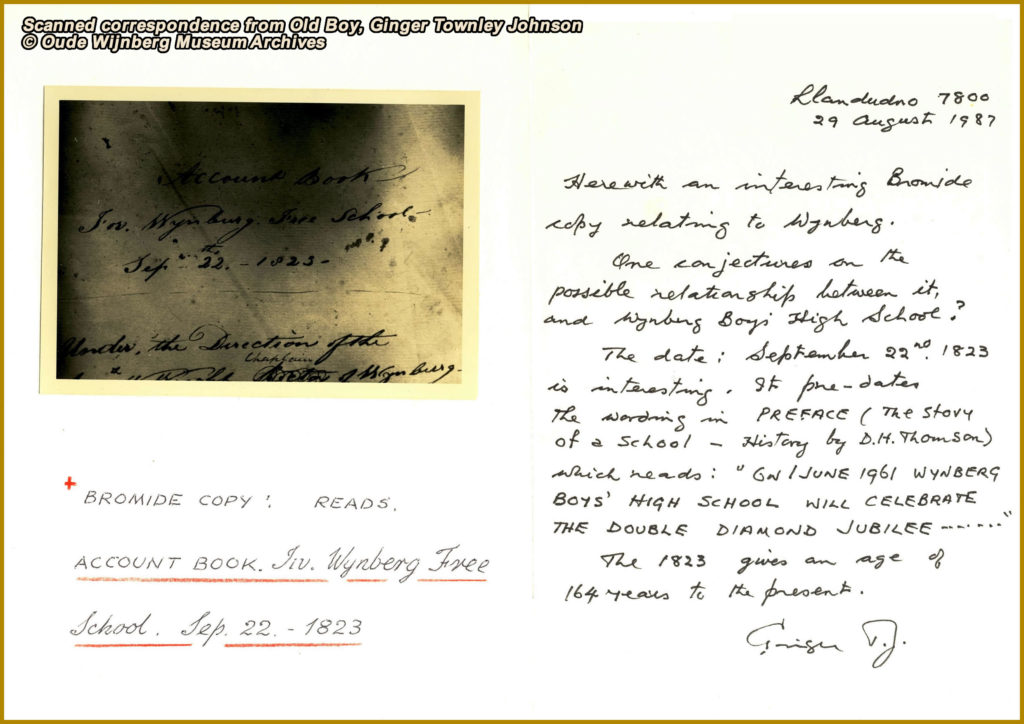