Monday 9 May 2022: The report on WBHS 1st XV vs Grey High, as published in the Cape Argus – published with permission and with credit to Mogamat Goosain Abrahams.

The annual rugby fixture between Wynberg and Grey High played in Gqeberha this year was a titanic encounter that saw the visitors winning 18-16.

The game was played in intermittent rain, which was not conducive to running rugby.

The forwards were engaged in a war of attrition with the rucks and mauls being fiercely contested. There was very little backline play on offer with both scrum-halves, Asaad Moos of Wynberg and his opposite number Daylin Myners making excessive use of the boot to establish a territorial advantage. 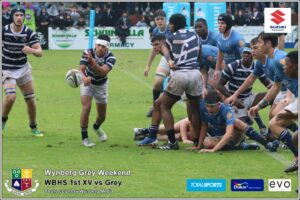 The home side led 11 – 5 at the interval after Amier Adams scored the opening try of the game for Wynberg.

In the second half with the wind at their backs, the Wynberg pack gained the ascendancy and hit back immediately with a try through hard-working prop Zack Porthen. Full Back Kyle Coetzee’s conversion attempt hit the upright, but Wynberg was back in the game at 11-10. Thereafter followed a period of sustained pressure by Grey as they had the Wynberg defence at full stretch. However, heroic tackling and unforced errors at crucial moments prevented Grey from scoring.

They did however extend their lead midway through the second half when Wynberg failed to clear a high ball and wing Sive Bwuwe crossed to put them 16 – 10 ahead. The home supporters were sensing victory, but Wynberg was far from done. From a line-out maul on the home  25, the forwards executed a perfect drive for Isaiah Louw the number eight to dot down, once again Coetzee attempted conversion hit the upright (16-15). With Moos’probing kicks keeping Grey Under pressure they conceded a penalty in the closing stages of the game This time it was left to fly half Eli Mentz to kick the winning points.

View all the Wynberg Grey Weekend fixtures and event information