“Twenty years from now you will be more disappointed by the things that you didn’t do than by the ones you did do. So, throw off the bowlines. Sail away from the safe harbour. Catch the trade winds in your sails. Explore. Dream. Discover.” – Mark Twain

That Day that we spoke about has finally arrived. Our time, at this place, has come to an end – and I Om te beklemtoon: ‘This place’ because it is not the end of the journey. Wynberg, through many different situations, has taught me many lessons and has instilled deep-rooted values, undoubtedly in me and you. Before embarking on your journey, I would like to share a few lessons with a few stories. 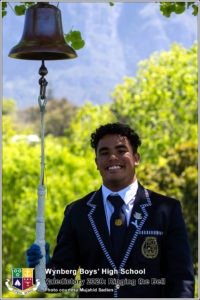 1. Before we even came to Wynberg, many of us had the opportunity of having an interview with Mr Richardson. During the interview, he asked us: “If you had a Magical Wand, what would you do with it?” I can tell you we all thought, this is the question that will get us accepted into the high school or not. We were not going to be selfish – so we said things like, “Solve Poverty, world hunger, crime – eradicate it all” – we never really meant it, we were thinking, “a brand new house or phone or Ferrari or some fancy drip for our wrists.” But then we asked Mr Richardson – “Sir what would you do?” and he simply said, “Make every boy know how lucky they are to come to a school like Wynberg.” Recognise the privilege that we have and Appreciate it.

2. Some of you do not realise it but we walk past a commandment every day. Those gates at the top read: “Men of Wynberg, enter the gates with humility, aware of the privileges and responsibilities which this school bestows upon you. Determined to avail yourselves of the opportunities on offer so that you too in time may enhance its reputation.” The school commands us to take every opportunity and make this place better than it was before we arrived. We need to realise that thousands have come before us, and there will be thousands who will come after us. Take every opportunity with both hands. My grandfather, before passing, always used to ask me, “Do you think my Suitcase is full” – I never understood what he meant until now. He was talking about all the opportunities, good deeds, and unregretful things he did. Make sure that your suitcase is full after doing anything.

3. Touch Rugby is never Touch Rugby. There is some level of fighting, verbal abuse, breaking of bones, some people even learn to become politicians and lawyers, like Hishaam, Salie, or Yaseen. Friendships sometimes even need repairing after a good game, like the time Josh Thomas close-lined Daniel Judge right where you are sitting, and when Connor and I tackled Josh so hard that he didn’t speak to us for three days. However, there is one specific story I would like to recall. It was in the early winter of Grade 9, we decided to come in early and play some Touch; it was getting quite competitive and the bell was about to ring for the start of the school day. My team was losing, and no this is not a winning story, we still lost in the end. There was a certain individual that I had on my team, Juan Seargant, who would not pass the ball, losing all our touches. There was a lot of gnashing of teeth and cursing from me. What I did not know was that Mr Eddy was watching the whole time and called me over. Being a Grade 9, and knowing Mr Eddy, I trembled. But what I learned that day, has impacted me for the rest of my life. Mr Eddy asked, “Do you know what you’re saying to the world when you say words like that?” He said, “You’re saying ‘I am Common’ “. That has partly shaped me into the person I am today. Be different, be better. Do not be common.

4. If you have been taught by Mr Taylor, you would know that his frequent phrase and rule of thumb is that “People are the worst”. However, they can also be the best. I may not be the best Head Prefect Wynberg has ever had and this might not be the best speech Wynberg has ever heard, and that doesn’t bother me because I am privileged to give this speech as a Head Boy to the best Bunch of Guys I have ever come across. Always try and See the Best in People.

5. Do not look for an argument where there isn’t one but fight for what is right. As young teenagers, we often think that most of what we do is right, and when told that we are wrong, we throw a tantrum. Mr Moser is an individual who has developed a skill where he makes you understand that what you have done is wrong. We as the leaders of the school use it all the time as a step-by-step process known as the Moser-Method. We even use it as a verb – for example – “Did you Moser Method Him?” Brilliant. What I am trying to say is pick your fights and know the difference between right and wrong. We live in a world where social media has become dangerous and made our eyes the masters of our brains and not the other way around. We need to see past this and think with our heads alongside our hearts. We need to be better men in our societies, stand up for injustice and what is right, stand up for women, stand up against racism, and stand up for the environment. Be better men, something that Wynberg has coached us to be. Live with the words of Mr Richardson in mind, “Everything you do sends a message.”

6. You can survive anything. Anything in this world is survivable because you are as invincible as you believe yourselves to be. This year of Covid-19 has taught us so much; it has tested us; torn us apart, but more importantly, it has taught us to appreciate everything more and that if we can survive Corona, especially during matric, we can literally survive anything after this. I have so much faith in this grade, in every single one of you.

I would like to take this opportunity to thank my mother Ruwaydah, who has been through it all, the ups and downs and all the rounds, my father, my brother, my grandparents, my friends – you know who you are – who have undoubtedly molded me into the person I am today, their parents who acted as in loco parentis through my high school career, the hostel boys, Mr Taylor my Mentor, the teachers who have made a massive impact on my life and who have invested their time in shaping me, and lastly Uncle Jannie and his wife, whose doors were always open and whose advice I could always seek – even though Mike and I would skip class time, especially Mrs Spammer’s class time on a Monday Morning. I thank you all.

Motho ke Motho ka Batho Babang (A person is a person because of other people).

Many of you don’t realise it but there are people sitting here today who you will never see again for the rest of your lives and for those who do have the privilege of seeing each other again, May we meet again as different characters of the same story. I cannot wait to hear your stories of success.

Make sure that your Wynberg tog bag is truly full when you leave this place, thank you, my brothers. The World Awaits the Extraordinary class of 2020.