Wynberg’s 2nd team water polo travelled to Knysna to participate in the 10th annual Oakhill Waterfront Chukka Festival from Thursday 10 – Sunday 13 February 2022. The festival is a unique schools’ open-water event hosted in the Knysna estuary amid a carnival atmosphere that attracts players and spectators from around South Africa.

From the outset, the Wynberg team was up against tough opposition against ‘A’ teams from the other schools, with our players and coaches delivering some great results in a packed playing schedule.

The first match against Hudson Park set the tone for Wynberg’s committed performances throughout the Festival. The 5 – 4 win over the team from the Eastern Cape was followed up with an edge-of-the-seat 3-all draw with old friends and rivals, Grey High. After being two-nil down at the break, Wynberg managed to pull back two goals and almost ended up winning the game. Credit must be given to the two goalies on tour, Michail Kasfikis and Xabiso Mkiva, who saved a number of goals to ensure the team was always in the running for a win. 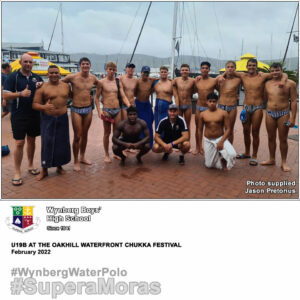 The match against our hosts Oakhill turned out to be a cracker. Oakhill arrived with lots of local support and the team could feel the pressure. Wynberg went up early by two goals but slowly allowed Oakhill into the game with a few lapses in concentration. Wynberg stretched their lead by one, but the hosts continued to hit back. With a minute to go, it was 4 – 3. With the crowd cheering and their tails up, Oakhill managed to sneak in a last-minute goal to draw against Wynberg.

After the draw, Wynberg’s players were keen to hit back and did so in fine style against Parklands College from Blouberg. Wynberg rained in 12 goals in the 20-minute match, conceding two. Joshua Felton scored 4 goals and goalkeeper Xabiso Mkiva came out of goals to score twice from the right fetch position. A wonderful way to end the day.

The players enjoyed a team dinner that evening at a Portuguese restaurant before making their way back to their accommodation for some much-needed rest. 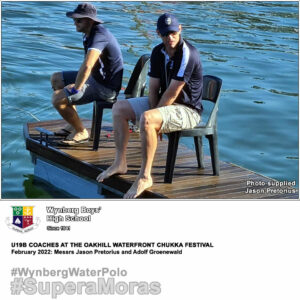 Saturday, with the temperature hitting 36 degrees, was set to be a long day with an early morning match, a midday match, and a match in the late afternoon. The first match of the day was against Kingswood and the team got out of the blocks early to secure a 10 – 1 victory.

Next was a very firey Fairmont side intent on giving Wynberg a run for their money. Fairmont started well and went up early with a goal. Wynberg struck back immediately and proceeded to score another to ensure the lead. At the break, it was 2 – 1 to Wynberg, but by the end of the third chukka, Wynberg was 4 – 1 ahead. The last chukka saw us score another 2 goals and the match ended 6 – 2.

The last game of the day was against a well-drilled Woodridge side that proved to be too good for the team on the day. After spending the entire day at the Waterfront, cheering and walking around in the sun, Wynberg seemed a little tired and flat in the match. However, the game was a very exciting one with Woodridge’s two early goals forcing Wynberg to fight back to stay in match. They did so, pulling it to 3-all in the final minutes of the game. Unfortunately, a 5-meter cost the team in the final seconds of the match when Woodridge’s centre forward made no mistake and scored a great goal to secure victory for the opposition. The boys were disappointed with the result as they knew it was a game they should not have lost. However, sometimes you need to lose to learn, and this was the case for Wynberg. 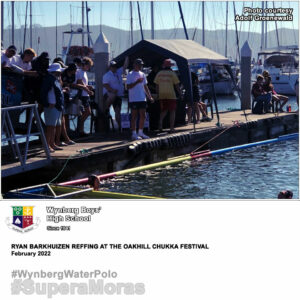 On the last day, the team was up against a very strong Glenwood 1st Team. Again, the support for the opposition was immense and parents and supporters came out the woodwork to support Glenwood. After studying and analysing the team the day before. the Wynberg team was up for the challenge.

Some outstanding defensive work ensured that the score remained goalless after two chukkas. In the third chukka Glenwood attacked with intent and scored two quick goals. It seemed as if Wynberg’s hope of pulling off an upset were dwindling. However, Wynberg were not about to lay down and die. In the final chukka Brandon Ashburner stepped up and scored two fantastic goals from the back to pull us level. The game ended in a 2 – 2 draw and was by far the best performance of the festival for the team.

In the end, we played 8 games, won 4, drew 3, and lost 1. The top goal scorer was Joshua Felton with 14 goals. Ryan Barkhuizen deserves a special mention as he was the only player to also referee at the Festival.

This is an exciting team with a mixture of youth and experience, and we can’t wait to see what they have in store for us in the seasons ahead.