Wednesday 2 February 2022: The Headmaster, staff, and the Wynberg Cricket community express our grateful thanks and extend our very best wishes to Wynberg Old Boy and Director of Cricket, Mr Andrew Wylie, who has accepted a post abroad.

Mr Wylie relinquishes his post at the end of February after five exemplary years at the helm during which his insightful leadership and vision have seen quality performances across all age groups, continued growth in participation, 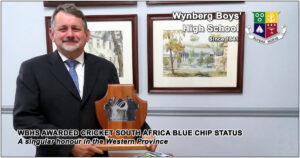 and a productive outreach in support of clubs and schools beyond the School’s traditional league rivals. All of which is quietly summed up by Cricket South Africa’s Blue Chip Award to Wynberg Boys’ High School in 2018, a singular status in the Western Cape at the time, and an honour recently renewed.

Mr Wylie joined his alma mater in 2017 in the newly-created role of Director of Cricket, a post designed to both maintain and grow the sport. Coming directly from his tenure as Head of the University of Stellenbosch’s High Performance Programme, Andrew was ideally suited to set the School’s cricket vision for the future. While his loss will be sorely felt, the requirements for his successor, as advertised on the school’s website,  can be read as his personal legacy and as an insight into Wynberg Cricket’s roadmap into the future.