Thursday 18 February 2021: WBHS takes great pleasure in announcing the special awards to students at our annual Prize Giving, and the awarding of a Scroll of Honour to the former Chairman of the School Governing Body, Mr Tapie Marlie. Congratulations Wynberg Gentlemen!

The full list, with citations as read out during the live-streamed service in the Clegg Hall: 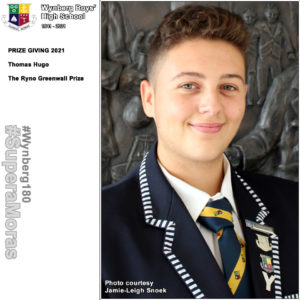 The Ryno Greenwall Prize (awarded for the most original history project of the year) is awarded to Thomas Hugo.

“The Grade 11 History research assignment requires students to identify and analyse two separate historical events in order to prove the argument that history does indeed repeat itself.

While facing stiff competition from other well-researched assignments that investigated topics such as comparisons of the Syrian and Congolese civil wars, and the Tiananmen Square and Hong Kong protests involving China, the winner of this year’s award distinguished himself with an excellent analysis of gender discrimination, as it relates to the feminist movement that emerged over the 20th and 21st centuries. Wielding a fluid writing style and the ability, both to evaluate and integrate his sources into a unified argument, the winner of this year’s prize demonstrated commendable skills in communicating a subject that remains relevant throughout the world today.” 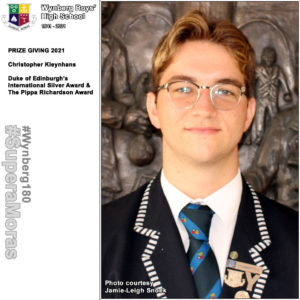 The Duke of Edinburgh’s International Silver Award is awarded to Christopher Kleynhans.

The Pippa Richardson Award (awarded for service to the school community) is awarded to Christopher Kleynhans.

“Chris is involved in a plethora of groups/activities at WBHS: he is the Interact President; a member of the Social Cohesion committee; The McNaughton core committee and the Service core committee, on which he has served since his Grade 8 year. In addition, he heads up the Blood Drive Peer Promoters and helps run the soup kitchen in collaboration with WGHS.

He fulfilled the role of student manager for Tennis and is a member of the Swimming team. He is head of first aid and is, himself, a level 3 first-aider. He accepted the responsibility of directing House Plays and has co-directed the Shakespeare Production.

Over and above, he is co-initiator and main driver of the annual Swimathon to raise funds for and awareness of mental health among teenagers. I think this provides fitting justification for why Chris is deserving of this award!” 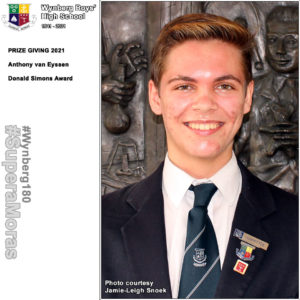 Donald Simons Award (awarded to the Grade 10 pupil who has shown the most improvement over his academic performances in previous years) is awarded to Anthony van Eyssen.

“Anthony increased by 8%. Only a handful of students increased their overall average at the end of last year – so to improve by 8% during a pandemic is an incredible feat. 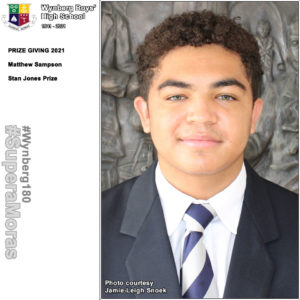 Stan Jones Prize (awarded to the Grade 11 pupil who has shown the most improvement over his performances in previous years at school activities) is awarded to Matthew Sampson.

“Matthew improved his position in the grade by 48 places as well as improving his average by just under 17% between Grade 10 and 11. This makes him very deserving of this award.” 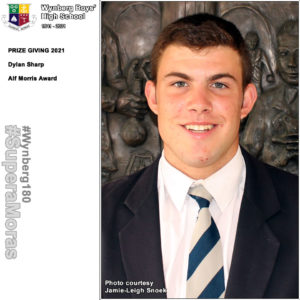 Alf Morris Award (awarded to a Grade 11 pupil who is an all-rounder) is awarded to Dylan Sharp.

“Dylan Sharp is the son of an old boy. He is involved in rugby and cricket. He is diligent in his academic work and is well-disciplined. He is respectful, kind and well mannered. He can always be counted on and is always involved in House Activities. He is a true Wynberg all-rounder.” 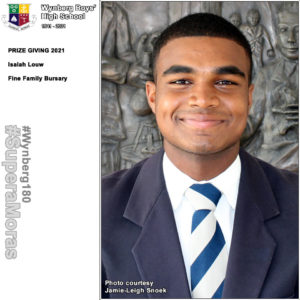 This was said about Isaiah:

“Isaiah joined Wynberg Boys’ High School in the middle of his grade 9 year. He applied to attend Wynberg as an incredibly promising student, sportsman and all-rounder. At the time he was enrolled at Macassar High School where he was thriving both academically and sporting-wise but felt that he was not in an environment that could offer him the opportunities that Wynberg could.

Since joining the Wynberg family he has only impressed and continues to develop as an all-rounder. He is a dedicated, motivated and passionate boy who is driven to take full advantage of his time at Wynberg. Isaiah has aspirations of studying at UCT and playing rugby after school. He understands what is required to make this a reality and is hard at work in that regard. In addition, Isaiah is very well-liked by his peers, the younger boys whom he interacts with in the class, on the sports field and in his House. He is highly regarded by his teachers, his tutor and his house head and plays a positive role in all his involvements his role in the school.” 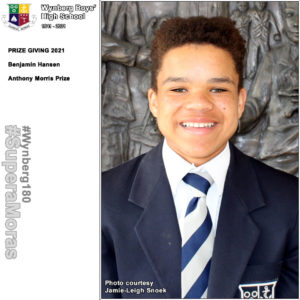 Anthony Morris Prize (awarded to the Grade 8 pupil who has shown the most loyalty to the school by his participation in school activities) is awarded to Benjamin Hansen.

“Beni played for the A-teams in three different sports last year and most people you come into contact with who know him will tell you how well-mannered and how lovely he is.” 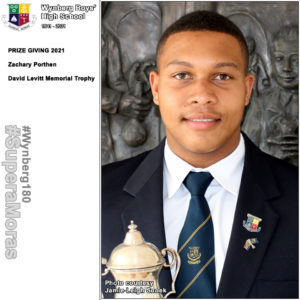 David Levitt Memorial Trophy (awarded to the Grade 10 pupil who was an inspiration to all his fellow students) is awarded to Zachary Porthen.

“Zach was selected to represent our 1st team polo side as a Grade 10 learner and the u16A rugby team which he co-captained. He played the clarinet up until 2020. Zach is heavily involved in Glebe and participates across all spheres. He is a shining example of the Wynberg way. He is punctual, polite, and has integrity which is significant because he also has influence which he uses to pull his peers in a positive direction. This has been confirmed by his teammates, school peers, coaches, tutor, and house head.” 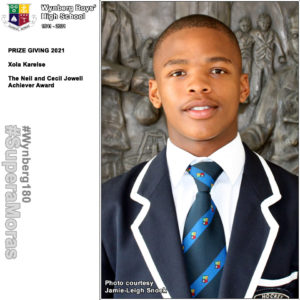 “Xola Karelse embodies what it means to be a Wynberg man. He started his journey with the school in grade 8 when he left home and came into a totally different environment of Wynberg and Littlewood hostel. Xola persevered with dogged determination to overcome the challenges of a new environment and a new medium of instruction in class. All the while he carried himself with a quiet dignity that set him apart from his peers. Xola is respectful to all he comes across, he has a kind demeanor, is a thorough gentleman, well-liked by all he interacts with. He has excelled in hockey and has represented the school in numerous A teams throughout his school career. Today we celebrate Xola for his achievements at Wynberg and for the example he sets to his peers.” 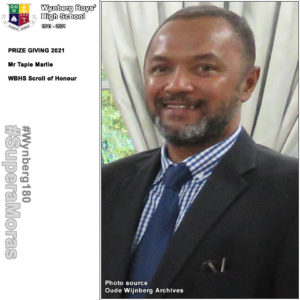 Scroll of Honour (Scrolls of Honour are presented to members of the Wynberg Boys’ High School community who have given exceptional service to the School) is awarded to Mr Tapie Marlie.

The first two scrolls recognising persons who delivered outstanding service to Wynberg Boys’ High School were awarded to Messrs. Arnold Katz and Ginger Townley- Johnson in 1986.  Until today a total of 37 such awards have been made (32 to men and 5 to women).  Today it is my privilege to honour the 38th member of this select group of people, Mr Tapie Marlie.

Mr Marlie joined the Wynberg Family in 2015 when his son, Daniyal, enrolled as a student at the school for his Grade 8 year. It was not long before he was commandeered onto the Governing Body where his knowledge of finances was immediately put to use. Mr Marlie went on to serve two terms over a period of 5 years on the Governing Body, the last three as Chairman. While Daniyal matriculated at the end of 2019, Mr Marlie has continued to serve on the Governing Body as a co-opted member where his institutional knowledge and deep understanding of governance and fiduciary matters are called on regularly.

In his tenure on the Governing Body, the school has had to deal with many issues. A fire, a drought and the challenges we faced here at school during the Fees Must Fall Campaign all called for a cool head and clarity of mind. It was my privilege to work alongside Mr Marlie as we successfully navigated these obstacles. The Engineering and Design Faculty now nearing completion was another major development that took place whilst Mr Marlie was Chairman of the Governing Body. Here we were involved in tricky negotiations with the Western Cape Education Department, while being faced with a highly enthusiastic Steering Committee ‘with stars in their eyes’. Mr Marlie served on this committee with distinction, always being the voice of caution and reason and ensuring that sound governance principles were maintained.

His major concern has always been the financial sustainability of the school, and the current healthy state of the school finances is in no small measure due to the systems he introduced whilst at the helm.

Mr Marlie, Wynberg owes you a huge debt of gratitude. Please accept this scroll from the entire Wynberg family as a token of our appreciation.