Monday 30 May 2022: The report on WBHS 1st XV vs Rondebosch, as published in the Cape Argus – re-published with permission of, and with credit to Mogamat Goosain Abrahams.

Rondebosch gave easily their best performance of the season before succumbing to a 24 – 15 defeat at the hands of high-riding Wynberg. The home side who led 17-3 at the interval were made to work hard in the second half to keep a marauding ‘Bosch side at bay.

The game played in intermittent rain was a titanic struggle between the two well-matched sets of forwards But credit must go to both sides for showing a willingness to keep the ball in hand. 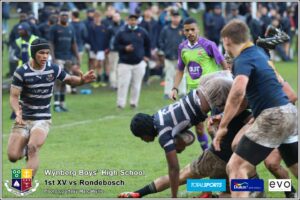 The game started off in a flurry with the Wynberg backs showing lots of intent, centre Ridhau Bey, in particular, showing some neat touches. They swept into a 10 – 0 lead as early as the ninth minute via a penalty by full-back Ryan Coetzer and a customary try by livewire scrum-half As’ad Moos after capitalising on a loose ball. Coetzer converted and shortly afterward he was again instrumental in forging his side ahead. From a set-piece, he ghosted into the backline creating an overlap for wing Jaque Huckins to score a converted try to put Wynberg 17 – 0 up. At this stage it looked like the home side would be in cruise control.

However, Coetzer blotted his copy back by copping a yellow card for a deliberate knockdown which allowed Rondebosch back into the game. They launched numerous attacks but notwithstanding the numerical advantage all they could show for their efforts was a penalty by Jacques Jooste just before halftime ( 17 – 3.)

In the second half with the wind at their backs ‘Bosch played with much more purpose and confidence as their forwards gained ascendancy. Their powerful scrum secured two tight heads and with the rain pelting down it was not surprising they opted to keep things tight. Flanker and captain Gareth Blackmore was prominent with his driving play and was rewarded with an unconverted try after forcing his way over from a maul (17 – 8).

Sensing that they had the home side’s defence at full stretch Rondebosch played with renewed zest. Their mauling play proved effective and in the 53rd minute, they struck again with a carbon copy of the first try. This time it was number eight Jamie Rickett’s turn to muscle his way over, Jooste added the crucial conversion to bring his side within striking distance (17 – 15).

Both sides threw caution to the win to ensure victory, but Wynberg soaked up the pressure and also was able to secure turn over ball at crucial moments to keep ‘Bosch out. With time running out Rondebosch conceded crucial penalties in quick succession and Coetzer sought the touchline with great effect. It was from a resultant lineout that the Wynberg forwards were able to secure a touch down by industrious number eight Isaiah Louw, Coetzer added the vital conversion to put his side two scores ahead (24 – 15) The final whistle went shortly afterward with the ‘Bosch supporters deeply disappointed after such a gallant performance by their team.