As a young boy Ethan began the recorder in primary school, as many people do! However, he was inspired by American drum lines and this led him to his first drum lessons. 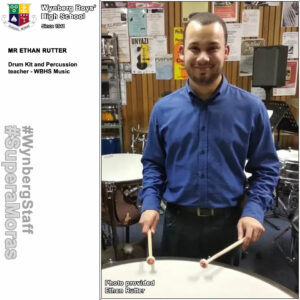 At sixteen he began playing in the Cape Philharmonic Youth Orchestra and Wind Ensemble as a percussionist. He then went on to study for a Performer’s Diploma in Music at the University of Cape Town (UCT) graduating in 2018.

In 2021 Ethan assumed the position as the Drum Kit and Percussion teacher at WBHS where he has a thriving studio.

In his spare time, Ethan’s hobbies include sim racing and Western Province Karting – frequently racing at Killarney International Raceway. He is in his first season of real racing and is already currently 4th in the championship!

A #WynbergMedia article, with grateful thanks to Mr Richard Haigh, Head of WBHS Music