Monday 29 November 2021:  Littlewood Boarding House celebrated the impending end of the school year with a festive and spirited Christmas dinner served in the Fish Bowl. The excitement at the return of this annual highlight was evident as the boarders tucked into a three-course meal provided by the hostel’s own Feedem professional caterers before the awards ceremony.

Special guest for the evening was Mr Julian Taylor, who leaves Wynberg at the end of this year, while Mr and Mrs de Waal presided over their final boarding house function before Mr de Waal’s retirement at the end of term.

Please use the tabs below for the special awards, the Superintendent’s address, 2022 Littlewood Head prefect address, and Danté Benting‘s farewell to Mr Taylor:

Congratulations to these prize winners, and well done to all Littlewood Men for your contribution during the year.

Awarded to the best all-round Grade 8:

Awarded to the boarder showing the greatest all-round contribution:

Awarded to the boarder with the most significant achievement:

Awarded to the boarder who is an example in every way:

Academic of the Year

Awarded to the boarder who has achieved outstanding academic results: 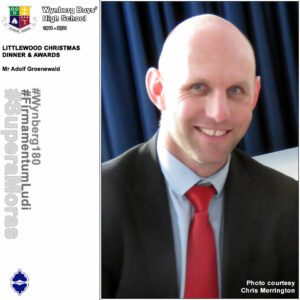 Good evening, Littlewood & Friends of Littlewood. Thank you for joining us for our 2021 Christmas Dinner.

Tonight is the first time I officially address you as the new superintendent of Littlewood after a few months in this position. Mr Rudd left some big shoes to fill, however, I decided to wear my own shoes tonight and not try to fill his. In my six years at Wynberg, I always heard about the vibe that Littlewood boys had, the camaraderie, the true bond of brotherhood that Wynberg is so famous for.

Covid has changed our lives significantly over the last 2 years. During the first 5 weeks of heavy lockdown boys and staff were trying to train in their lounges, running 5 or 10km around the house to show their coaches they were keeping up their training. Pushing for the idea that we will still have a sports season after the 5 weeks of expected lockdown.

Five weeks became 2 years of hybrid teaching, Teams meetings, and social distancing, opening our eyes to this becoming the new norm. Would all the traditions that Wynberg and Littlewood have developed over the last 180 years be lost or forgotten? Would Littlewood Men still have their vibe when we moved past the worst of the pandemic and began to live with Covid?

Things have improved since last year with a limited return to sports fixtures and, as the numbers in cases started dropping, some of the “good old ways” started coming back.

When the new prefects were selected for 2022 Jason Beckman as the new Head prefect for Littlewood and his team (Callum Lawson-Smith, Ron Thomas Jean Louw, Joshua Hayes, and Liam Coetzee) decided we wanted the old Littlewood back. They wanted the good old traditions with a modern, youthful vibe.

The first of these was the march to Joe’s Cafe, followed by soccer on the Astro and inter-tutor competitions on a Friday with a braai to feed the Littlewood men after a long day. It was amazing to see how quickly the spirit was lifted and the rest of the hostel began buying in. The chants down the corridor or in the dining room, “Van Der Merwe”, and every boy getting involved.

I can truly say Littlewood is healthy and in a good space. We will rise to the top and will remain the backbone of this fine institution for years to come regardless of what is thrown at us.

To Tyler Williams and his team: well done for doing your best under very difficult circumstances. I want to wish the matrics well in their future endeavors and remember everything you have learnt in your time at Littlewood. Enjoy your Christmas gift from us. 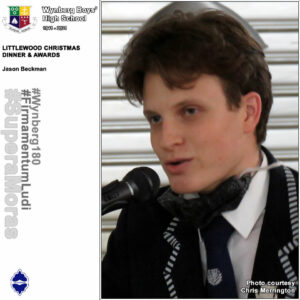 When I started writing this speech, I had this idea of a highlight speech about leadership, brotherhood, and what it means to be a Littlewood Man, but by the looks on most of your faces you are ready to eat the tablecloths, so I will keep this short.

Before I start, I want to say thank you to the staff and to you guys, the boys, for giving me the opportunity to help return the pride of Littlewood that was sadly diminished during lockdown.

We have had our fair share of ups and downs in the past 3 months since I was elected.  From the Grade 8s having to fix the flagpole once a week after the rope being pulled too high, to the Grade 11s tearing up the Common Room after Ronaldo scores a goal even though Manchester United is still 3 points behind, and the near banning of watching soccer on TV at all.

I want to thank you all for your efforts in getting involved this year.  The prefects and the rest of the school are starting to remember that Littlewood is a house not to be underestimated and with an empty spot in our trophy cabinet, it’s time the Friedlander Shield comes home.

Next year is going to be a tough one, for the Grade 11s we will be facing Matric and all its challenges.  For the rest, there will be inter-house sports training and academic work to be done.  We will not accept complacency, mediocrity, or half-hearted attempts.  Next year we push ourselves harder than we ever have before in all pillars, in and outside the school.

Next year is going to be a major adjustment for many of you, with Weekend Gating and Weekly Marches making a return.  I hope you all have the same pride in this house as I do and tackle these traditional tasks with Pride and Honour.

Littlewood has been my home since I walked through those gates 4 years ago.  I hope this remains true for all those who follow through these gates after me.  I hope you all rest easy this December knowing that you did nothing but your best and can return ready to crush 2022. 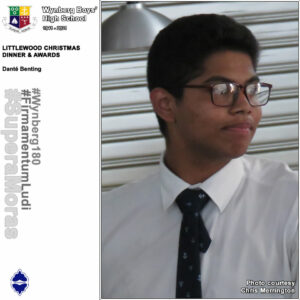 My first real encounter with Mr Taylor was in the year 2018. I was in grade 9 and it was also the year of the drought when WBHS had arguably its best-ever first rugby team. Back in those days, the school used to offer short courses, things like gardening, car maintenance, and blacksmithing. One of those courses was run by Mister Taylor, it was called Toast Masters. In this 3 week course, Mister Taylor taught the rudiments of public speaking to a handful of eager boys, me being one of them. It’s actually a bit ironic, to be honest, that the man who taught me everything I know about making a speech is also the person whose farewell speech is the last I’ll deliver at school. He who plants the seed is he who reaps the fruit.

Before then I had only heard of Mister Taylor in mysteries and tales of old. He was the head of Culture who had started the Concert in the Quad, and it was his science lab that was filled with strange odors and old couches where many of the gents used to play table tennis. But when I started talking with him the first thing that I realised about him is that he is a man who enjoys having conversations and connecting with people through speech. It was through mister Taylor’s gentle awareness of whomever he was talking to, that I learned the importance of being present and in the moment.

The next time I met with Mr Taylor, other than for the occasional chat, was during the Grade 10 hike of 2019. My grade was the last in recent Wynberg history to complete the Nyamezela Challenge. During this hike we gave him some crazy memories. Like that time Tee Bell almost killed Nick Evans, and that other time that Aaron Johnstone actually killed that massive spider. That week in the mountains was quite the bonding experience, and as we hostel boys learned more about each other, I also learned more about Mr Taylor.

Julian Taylor is the second most honest man I have ever met. Only second to Mr Moser of course. But here’s the thing about honesty, it is like ice cream, it comes in many different flavours. In the case of Mr  Taylor, I’m not talking about just telling the truth, no, there is a certain ease or nonchalance if you will, that only shows when one is completely comfortable with oneself, and that’s Mr Taylor. He speaks to everyone in the same way and holds everyone to the same standard. He shows every person the same side of himself, and that’s because there aren’t different sides, there is only … him.

At first, he seemed like a complicated man, with his intricate hand gestures and strange facts about … everything actually. Once you got to know him, you’d realise that Julian Taylor is very much like a watch, he is the culmination of a multitude of very simple facets that have amalgamated into someone that has made hostel an easier place to live.

When thinking about it I realized that Mr Taylor, just like every other man, can be summed up by his beliefs and his demeanor, and the balance between the two.

Sir, I hope that you spend your days as you wish to spend your life, as you once taught us in assembly, and that hopefully somewhere along your yellow brick road, you stumble across someone who is just like you, and in that way, you too will come to learn the impact you had on us all.

I’d like to end with a quote by Ray Bradbury from the book, Fahrenheit 451:

‘Why is it,’ he said, one time, at the subway entrance, ‘I feel I’ve known you so many years?’ ‘Because I like you,’ she said, ‘and I don’t want anything from you.’