Monday 28 November 2022: A festive end to the year for Littlewood House boarders as they gathered in the Fish Bowl for the annual hostel Christmas Dinner and Awards evening. The evening got off to a rousing start with the boarders in fine voice, delivering “Happy birthday to you” to Headmaster, Mr Deon Scheepers, before the Littlewood men and their special guests enjoyed a slap-up three-course meal and spirited addresses by former Housemaster, Mr Estian van der Merwe, and Littlewood Old Boy, Mr Brad Bing, who presented the annual awards.

Excerpt from Superintendent, Mr Adolf Groenewald’s speech to the boys: 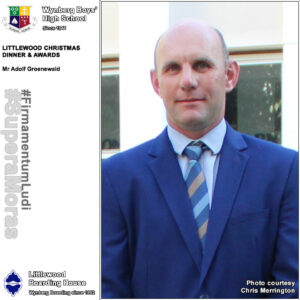 Looking back at 2022 and it is hard to believe that it is the end of my first full year as Littlewood Superintendent. Last year you all said farewell to Mr Rudd and his family and welcomed my wife and me into the Littlewood family. That evening was also my first night on duty, all alone at dinner, while the rest of the staff was at the Junior School Pavilion for the Rudds’ official farewell. After dinner, there was a “Littlewood welcome” of note. The best way to describe it was as if a bomb had detonated in the hostel- boys cheering and music blaring  – it was crazy. I left it, giving the boys their time to let loose. But after 15 minutes of increasing chaos, I had to step in. I saw a prefect and said ‘Right, that is it!’ Within 5 minutes every boy was in his dorm getting ready for prep. I saw then and there the mutual respect between the boys and the staff that defines so much of hostel life, and continues to flourish. Well done!!

Tonight we say farewell to the matrics – what a bunch of men! It took me a long time to find a way to describe this group – all of you have heard the quote “Life is like a box of chocolates, you never know what you going to get.”

There are all sorts of flavours in Littlewood’s Matric Chocolate Box, different shapes, sizes, and designs. While one can group them all into a single layer, it’s the individuality of each and every one of them that combines to make the perfect chocolate recipe. Or in the case of the Class of 22, it’s been the respect for one another and the camaraderie you’ve shared. 5 years of spending time together and building a bond that no day boy will ever understand.

I wish you well for the last few exams and good luck with your future endeavours.  Enjoy your Christmas gift from us.

To the Grade 11s taking over in 2023: Lulibo Fula, as Littlewood Head Prefect, and your team of Nathi Matyeba, Sange Mbatu, Xolela Hoyi, and Akshay Lalla – the platform is there for you to have a great year leading Littlewood House. Good luck, the entire hostel backs you to do great things.

I can genuinely say Littlewood is healthy and in a good space. We will rise to the top again in the inter-house competition and will remain the backbone of this fine institution for years to come in the best of our Supera Moras traditions.

Tonight, we also say farewell to two of our hostel masters – Mr Andries Bezuidenhout and Mr Michael Rushby. Thank you for all that you have done in your time at Littlewood. It has been a pleasure working with you over this period. Andries, I wish you well in your new day house – but we all know that you will secretively still cheer for Littlewood. Michael, good luck next year on the next step of your teaching journey.

I would now like to call Mr Bing, our guest speaker for tonight, to present the prizes.

Matthew Saunders –  awarded to the best all round Grade 8.

Juan James –  to the boarder with the most significant achievement.

Jason Beckman –  awarded to the boarder who is a positive example in every way.

Academic of the Year

Connor Thompson –  awarded to the boarder with outstanding academic results.

Xolela Hoyi – awarded to the boarder who has displayed leadership and participated at the highest level (most house points).