Monday 15 August 2022: The WBHS Mathematics Department hosted its Interschools Maths Quiz after a two-year break. More than 20 schools made up 80 teams of 4 to compete in answering fun Maths questions of mixed levels. The excitement of the students as they managed to mingle after a long time of isolation was a pleasure to see! 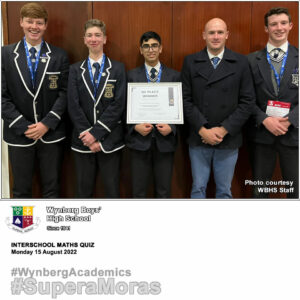 The evening began with Mr Neil Eddy from Ubuntu Maths captivating the students with his brain-twisting maths games, a fun warm-up before the competition began.

There were two quiz events, the first a 30-minute screened Quick Think quiz, where the students answered questions to the clock. The second part of the evening was an online quiz, run by WBHS’ Mr Pietie Loubser. A set of questions of varying difficulty and duration appeared on the students’ electronic devices. Each team of four had to enter their answer, with a running leader board continuously displayed which led to much excitement in the hall.

Simon’s Town High School was awarded a prize for being the school registering the most teams. There was also a Wheel Spin for instant prizes, where teams from Springfield Girls, Islamia, and Rondebosch Boys won.

The night ended on a high note when Mr George Chirume from TANKS Tangible Africa spoke encouraging students to join their drive in introducing coding at schools. He also donated some of the prizes for the night. A big thank you to our Maths Staff,  the WBHS Ladies’ Association for donating prizes and organising tea and snacks for the participants, and our Media/Marketing lads. 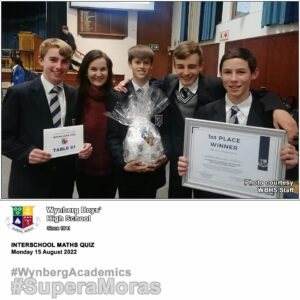