Monday 23 May 2022: The report on WBHS 1st XV vs Bishops, as published in the Cape Argus – re-published with permission of, and credit to Mogamat Goosain Abrahams.

Wynberg brought Bishops’  purple patch of 10 unbeaten games to a halt with a well-deserved 20-14 win over the home side in a pulsating encounter.

The opening quarter was a tentative affair with both defences on top. However in the 20th minute, all this changed when Wynberg launched a counterattack with flanker Cayno February and wing  Xolela Hoyi prominent, enabling scrumhalf Asad Moos to race over for a try in the corner. Full-back Ryan Coetzer was on target with the conversion.

Stung by this reversal, Bishops had the visitors’ defence under enormous pressure but it was Coetzer who put Wynberg further ahead with a penalty. Wynberg suffered a setback when captain Moos was yellow carded shortly before the interval and not surprisingly Bishops with their numerical advantage reduced the deficit. From a rolling maul hooker, Max Cary, got the touch down for fly-half Shaywan Blankenberg to convert. On the stroke of halftime Coetzer goaled his second penalty to make the halftime score 13-7. 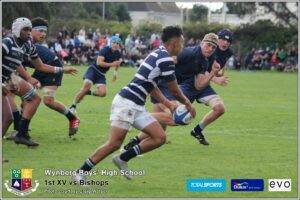 In the second half, Bishops came out guns blazing with centre Nic Allison, showing some neat touches, always a threat. However they were repelled by a committed Wynberg defence who put their bodies on the line in defending their goal line. Disaster struck the home side when lock Adam de Waal was sin-binned. This time, Wynberg capitalised when from a line out, flanker Xola Nyali, showed good pace to cross, for Coetzer to convert yet again.

With the clock ticking down Bishops came within striking distance when wing Olo Sopotela took advantage of an overlap to score in the corner, Blankenberg converted and it was game on. Wynberg survived some anxious moments as Bishops threw everything into attack but their defence held firm, and were also able to secure vital turnover possession. The final whistle went, much to the delight of the vast number of Wynberg pupils who stormed onto the field.