Every now and again in life, one meets someone special. Someone who by his very presence enhances our existence. Such a person was Dave Stewart.

It must have been serendipity that gave me the idea of asking him to be the WBHS Patron of Rugby some fifteen years ago. It would be difficult to find someone more loyal or more committed to his old school. Although rugby was his passion (with the possible exception of his wife Joy!), he loved everything about the school and would be seen at prize givings, Valedictories, and the full ambit of music concerts – both indoors and out. 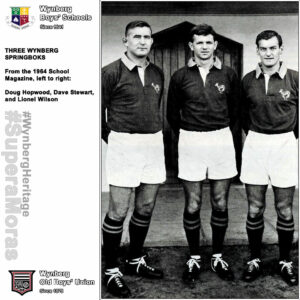 We would travel together to away rugby games. He was a conservative driver and at 80 kilometres an hour down the N1, we would have plenty of time to discuss the state of rugby from school to Springboks. Interspersed in all of this would be the state of the land or the latest painting he had completed. There was always a spring in his step after we had parked the car, and he would settle into his special chair, wearing his special white hat to watch his beloved Wynberg. The only time he would allow irritation to creep in would be if a Wynberg player kicked possession away and the involuntary ‘oh m-a-n’ would erupt from his lips followed by ‘didn’t you see the overlap?’

Come the end of the match, win or lose, ever the gentleman, he would congratulate the coaches and staff of both schools – unfailingly concentrating on the positives. Contrary to the usual attitude in school rugby games, he was not about results. Quality of play was everything and he loved nothing more than to see the boys express themselves.

I fear that watching rugby and attending music concerts will not be quite the same next year. I will sit on the bank and give a reverential nod to the beautiful Hawthornden Field he loved so much – with the imposing mountain above it. Those of us who knew him, admired him, and were privileged to call him a friend know that his spirit will be forever on the bank – and in my mind, I will continue to hear the anguished cries interspersed with exclamations of delight.

His legacy will be the example of a fierce love and loyalty towards his old school. If our current boys, in their time, could give back 1% of Dave’s commitment, Wynberg would be a school second to none.

Sincere condolences to Joy and her family. Without Joy, there would be no Dave. His email address encapsulated this: davejoy@ …

He will be missed. He was special. Dave Stewart was a true Wynberg Man.