The much-anticipated return to the traditional holiday tours played out in the Eastern Cape for the U15A, and at home on the Jacques Kallis Oval for the 1st XI, with both age groups playing quality cricket throughout, and with some great individual performances. In Mr Andrew Wylie’s words:

3 x 100s, 12 x 50s, and lots of progress by all the boys. Thanks once again to the staff who gave up time during the holidays to ensure our boys got to play, and to our Wynberg Families for their unwavering support!

Please use the tabs below to read more:

The U15A squad embarked early on Friday the 1st of October on the annual Grey u15 tour. The boys arrived with much excitement as it was their first Wynberg sports tour after the challenges of the  Covid pandemic.

On our arrival at Grey High School, it was evident that the inclement weather would be a potential obstacle for games on day 1. WBHS was scheduled to play against Woodridge at their home ground but the heavy overnight rain and waterlogged fields meant that the game had to be moved to Pearson High School B field for a declaration match.

The early morning rain clouds made way for ice-cold gale-force winds from the start of the match. 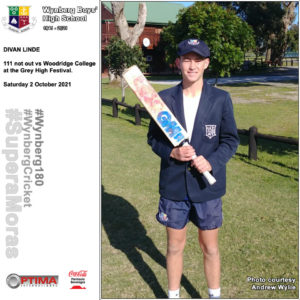 Woodridge found it challenging to cope with some accurate bowling from the Wynberg seamers initially and soon found themselves in trouble at 41/5 after 19 overs. The introduction of off-spinners Ethan Leibrandt and Josh Johannes completed the damage when they claimed 4/28 and 4/4 respectively.

The Wynberg response started well with both Shadley Allie and Fayaad Jacobs looking comfortable against the new ball. Allie departed lbw for 32 and this brought Divan Linde to the crease. The pair put on a 130 run partnership before both batsmen were retired with Jacobsen a patient, but well crafted, 53* and  Linde scoring his first Wynberg century 111*. Xavier Garvs and Benni Hansen came to the wicket for the final 6 over burst that would take the score to 236/1 declared with Xavier Garvs being particularly harsh on the attack smashing the ball out of Pearson a couple of times.

With rain threatening again and approximately 31 overs remaining the Wynberg attack had another attempt to take 5 wickets in the second innings. The match ended under dark rain clouds with Woodridge 48/4 after 30 overs. A very comprehensive performance from Wynberg. 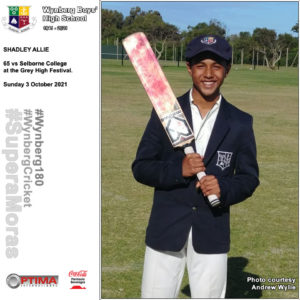 The Day 2 fixture was another declaration match against Selborne, this time at Victoria Park High School. Benni Hansen won the toss again and elected to bowl. Selborne made steady progress against some effective bowling from the seamers. The first wicket fell at 42 with Ethan Leibrandt striking first. The spinners again managed to compile the pressure and leg spinner Divan Linde picked up two crucial top order wickets. Linde would eventually finish with 2/16 Leibrandt 2/40 and Yaqeen Brinkhuis 2/14 as Selborne ended on 149/9 in 60 overs.

The Wynberg response started with the early loss of Fayaad Jacobs but the fluent 104 run partnership between Allie and Linde took the team to a strong position. The 2 batters played positively and really punished anything remotely off line. With their dismissals, Allie 65/82 and Linde 60/68 Benni Hansen 18* secured a very comfortable 7 wicket win with 20 overs remaining.

Day 3 started off with a scenic hour and a half drive to Makhanda (Grahamstown) to play St Andrew’s College. With heavy rain predicted for mid-day, it was decided upon to play two T20s.

WBHS won the toss and elected to bat under grey skies and freezing cold conditions. The Wynberg batsmen set a superb tempo after the early loss of Allie. 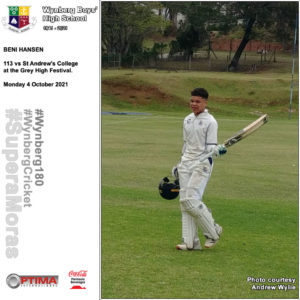 Muaath Ryklief promoted up the order to open proved a fantastic foil for the energised and run hungry Benni Hansen who had limited batting opportunity the previous two matches. They struck the ball superbly and ran with lightning intensity to forge a 160 run partnership. 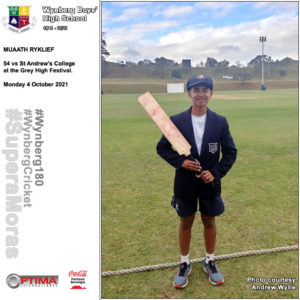 Ryklief finishing on 54* off 44 and Hansen becoming our second centurion of the tour with a stunning 113 off only 66 balls to set a challenging 186 to win.

St Andrew’s, to their credit, came out of the blocks in fine fashion and really put the Wynberg seamers under pressure in the 1st power play. The introduction of spin however proved crucial as Divan Linde’s 4/22 sealed the victory with St Andrew’s finishing on 144/5 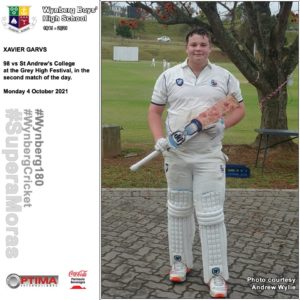 WBHS won the toss and elected to bat. A slightly rearranged batting line up this time still did not stop the squad from setting an amazing target of 237 in their allotted 20 overs. Xavier Garvs (98 off 42) opened the batting with Linde (47 off 25) the two set about putting the bowlers to the sword. Garvs hit 5  massive sixes that threatened the nearby town traffic.

St Andrew’s, true to form, started at a blistering pace with their response as they looked set to push the target. Ethan Leibrandt (3/33) had other ideas as he broke a key partnership and took a fine catch at long-on to break the momentum of the innings and St Andrew’s finished on 167/9

Another fine result for this ever-improving squad.

The last day set up a wonderful opportunity for the young men to take on hosts Grey High school on the picturesque Pollock oval in a 50 over encounter.

Benni Hansen won the toss again and Wynberg had no hesitation in batting first in conditions that finally resembled summer.

Allie looked comfortable until he pushed at one outside off stump and nicked behind. Divan Linde (63 off 79)strode to the crease to join Ryklief and he immediately looked like a man on a mission. He struck some of the most scintillating straight drives for four to get into his rhythm. Xavier Garvs (58 off 40) joined Linde and added extra pace to the innings. With a sudden flurry of wickets, Josh Johannes (52 off 50) and Ethan Leibrandt ( 48/59) played with great control and maturity to regroup and then attack at the latter stage of the innings to take Wynberg to a very competitive 313/9 in their 50 overs.

The spinners Johannes, Leibrandt, and Linde maintained the pressure superbly and Grey managed 176/8 in their 50 handing Wynberg a comprehensive victory and leaving them unbeaten on tour.

The tour proved a fine experience for our young cricketers who had sadly missed out on their u14 tours, and they will surely look back at this fondly as they created memories, friendships, and learnt the many valuable lessons offered by touring and playing competitive sport.

Special thanks to coach Thafier Ely whose energy, enthusiasm, and trust each day allowed the boys to flourish on tour. 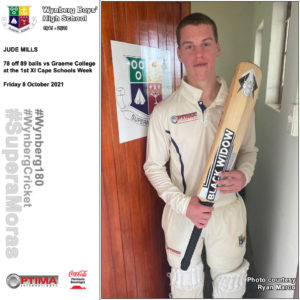 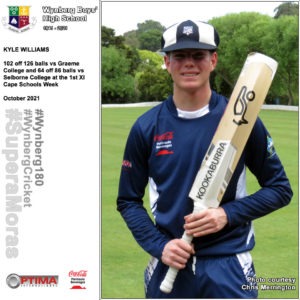 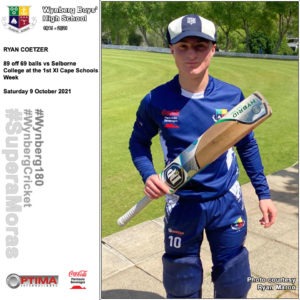