Saturday 9 April 2022: GiveLight South Africa, in collaboration with the WBHS Muslim Students Association (MSA), hosted an Iftaar, the breaking of the fast, for 120 orphans and their caregivers – more than 200 people attended the event held in the Clegg Hall.

The children invited came from eight foster homes around Cape Town, including Delft, Bonteheuwel, Athlone, Rylands, Mitchell’s Plain, Hanover Park, Kenwyn, and Newfields. Each of the children and guests received a box with “boeka” – treats, drinks, water, dates, and a hearty meal of soup, chicken, rice, and baby potatoes, as well as party packs and sundry gifts. 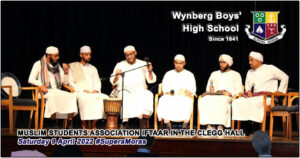 They were entertained by a nasheed group, Khuddamul Islam, who delivered some spiritually uplifting renditions adding to the atmosphere of the event and illuminating the Clegg Hall. The guests were addressed by GiveLight SA Board Member and Islamic Scholar and Community Leader, Moulana Muhammad Carr, on several important matters, including caring for our orphans.

The intention of the event was not only to feed and spend time with the orphans during this Holy Month of Ramadan but also to create a connection between homes and orphans, thereby encouraging a spirit of sharing and caring in the global and local orphan families.

Report with thanks to Nasiera Badroodien (Country Director of GiveLight SA) and Fayaaz Ebrahim (Grade 10, WBHS)

GLSA is an NPO that has been serving orphans in four foster homes in Cape Town over the last five years. GLSA is a sister organisation to the Givelight Foundation based in California, USA. The founder and CEO, Dian Alyan, established the Foundation on the back of the 2004 Tsunami in which she lost 40 family members. She built her first orphan home in Aceh soon after, and since then the organisation has built homes in six countries including Cambodia, Sri Lanka, Bangladesh, Pakistan, and Morocco, as well as supporting orphans in Turkey, Gaza, Syria, and Yemen.

After a visit to Cape Town in 2016 Dian Alyan pledged to build a home for orphans here. To date, GLSA has bought land and has pro bono architects finalising the design plans. Their vision is to build a children’s village for 48 orphaned girls in Schaapkraal within the coming year. Together with funding from Givelight Foundation, GLSA is active in raising funds for the construction and running of this village for orphan girls.