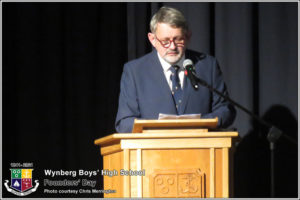 Good morning Mr Westvig, special guests, Old Boys, parents and young Wynberg men. What a pleasure it is to welcome you all to this very special, yet different, Founders’ Day Ceremony. This ceremony forms part of the Wynberg Boys’ High 180th anniversary celebrations and is also an integral part of our annual Heritage Week usually culminating in the final winter sports fixture against SACS and the Old Boys’ Dinner. It is wonderful to have so many of you joining us today, albeit remotely.

The past two years have been very trying for schools such as ours who rely heavily on the building of a feeling of brotherhood amongst our boys through events such as assemblies, cultural gatherings, sports fixtures, cheering’ and traditional gatherings such as Founders’ Day, Prize Giving, Valedictory, etc. These are occasions when we gather as the Wynberg community and celebrate that special Wynberg “gees” and brotherhood.

Because almost half of our current school population has not yet experienced a normal high school year, we face the possibility of the significance of these traditions being forgotten and consequently disappearing from our school’s ethos. That is why I have been asked to explain the origins and significance of today’s ceremony, particularly for the benefit of our younger students and their families.

Founders’ Day is both a celebration and a memorial service. We gather to celebrate the founding of our school 180 years ago and to remember the tens of thousands of people, living and deceased, who have contributed to the development of this school making it what it is today.

On a more somber note, it is also an occasion when we remember a very special group of young Wynberg men who never had the opportunity to either further contribute to, or even enjoy and celebrate the successes of the school once they’d left. They are the young Wynberg men who died in the major conflicts in which South Africa was involved during the 20th Century.

You may rightly ask what the relevance is of a Founders’ Day Ceremony. After all, those who died were fighting in Eurocentric or First World conflicts which had very little to do with Africa. In our 175th book “Brothers in an Endless Chain” in the section on transformation, these questions are also raised and addressed.

My response is that I consider this ceremony to be as relevant today as it ever was. I say this because I don’t see this ceremony in a national or international context but rather within the context of this school. The members of the Wynberg community who were fortunate enough to survive these wars made a solemn promise to their comrades who had died in combat never to forget them and this is what we are doing today. We are honouring the incredible bravery and sacrifice made by young men from this school who went to war, many even younger than our senior boys sitting here today.

In this ceremony, we also remember and acknowledge a painful period in our history when people of certain races were excluded from attending this school. Many of their descendants attend Wynberg today and are present in this ceremony this morning.

But Founders’ Day is more than a memorial service. It is also a way of celebrating everyone who has made a contribution to Wynberg over our 180 year existence: Wynberg Boys, their parents, teaching and support staff, community members, and other benefactors. They are both male and female, wealthy and poor, people from all walks of life and of every colour and creed. Their contributions have all been significant and we remember and honour them all today.

I would like to conclude with the Founders Day reading and prayer:

Now is the time of the year when the members of Wynberg Boys’ High School pause to remember the Old Boys of this school whose headstones are scattered in military cemeteries in distant lands. It is gratifying to know that they have not receded into the faceless anonymity of the distant past.

Please bow your heads as I give thanks for their lives:

‘O Lord God, help us to remember all the Old Boys of this School who have given their lives in times of war so that we may live in peace and enjoy our lives. Grant that we may be worthy of their sacrifice. We give You thanks for their lives, for their example, and their courage.

‘O God, who gives us so much, give us one thing more: a grateful heart for the sacrifices of those who did not return. Grant that the boys of this School may live out their today and that their lives will enhance our tomorrow. Amen’

Thanks to Mr Westvig by Kieron Adams, Deputy Head Prefect

Roll of Honour – reading of the inscriptions on the memorials by Ben Currie, Head Prefect

Mansions of the Lord sung by the Vocal Ensemble

Hymn: O God Our Help In Ages Past

Mr van Schalkwyk closes the ceremony, and the stage party leaves to the School Song