It is an absolute honour to be able to pay tribute to, and thank, a true Littlewood and Wynberg legend. Uncle Eddie started at Littlewood in 2001. He has been the custodian of Littlewood ever since. I say custodian because a custodian is someone who has responsibility for taking care of or protecting something.

Many boarders and their families got to know Uncle Eddie as the face of Littlewood. He could always be found in the gardens, ever ready to greet families as they entered. The magnificent gardens at Littlewood were his pride and joy and they have not been the same since his forced medical retirement earlier in 2020.

There are so many boys and families who have passed through Littlewood who’re all the better and wiser for having had Uncle Eddie in their lives. He truly is a people’s person, enjoying nothing more than having a casual chat in the garden, corridor, or parking area. The Littlewood staff who resided here with their young children will all testify to the fact that Uncle Eddie would take joy in walking their kids to school, with every ‘Little-ly” given some lesson or the other in maintenance jobs. I know both my kids, Olivia and Daniel, the little Van Schalkwyk’s, the Faulds’ children, and many other youngsters, have had the pleasure of interacting and learning from Uncle Eddie, regularly asking to be included in anything that Uncle Eddie was involved in.

Uncle Eddie is extremely well connected and knows everyone. Whether you are looking for spares, needing to repair your car or house, looking for the best price on snoek or even kreef from Paternoster, Eddie was the man you needed to speak to. Uncle Eddie is a man of integrity and natural kindness, someone people are naturally attracted to. Always first to help someone out, I know of countless Wynberg Boys who Uncle Eddie has transported daily from their homes to Wynberg. One would often see him arriving early in the parking area with a number of youngsters fast asleep in the back of his bakkie. He would be found around the fields, watching these boys from the side-lines and then taking them home. I don’t think he realizes, but there are many children who look up to him as a father figure. 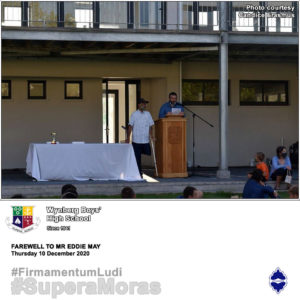 And yes, if you have any interest in Sport, Uncle Eddie would have held you in conversation for hours. One would often find Uncle Eddie offering lessons to any Wynberg boy interested in golf, after school or during his lunch break. At the Wynberg Golf Days, and particularly Old Boys golf days, old boys always wanted to play with Eddie because their chances of winning increased hugely if he was in their four-ball. An extremely good golfer, Eddie grew up in Kirstenhof, and he and his dad played regularly at Westlake Golf Course until the forced removals of apartheid relocated them to Mitchells Plain.

He is an avid soccer man and has been basking in the glory of his team who has performed so well in the last two years. How can one ever forget his Liverpool branded car? Clubs like this are all the richer for having fans like Uncle Eddie.

Uncle Eddie, I want to assure you, because of who you are and your years with us, that You will Never Walk Alone. When people heard we were saying goodbye to Uncle Eddie, I was requested to share the following:

Mr Richardson (former WBHS Headmaster): “I have known Eddie as his Dad was our head groundsman and worked on our cricket pitches for 25 years. Eddie loved his golf and whenever we met we would talk the game. I reckon he has played on every course in the Cape! I thank him for carrying on the family tradition in serving Wynberg so faithfully. I wish him well for the future and may he continue to hit the fairways regularly.”

Stefan Potgieter (WBHS teacher): “Please wish uncle Eddie all the best from me and thank him for his kindness and friendliness during my time at Littlewood and beyond.”

Peter Murison (former WBHS teacher): “I would like to express what everyone already knows, a place like Littlewood would be nothing without someone like Uncle Eddie giving so selflessly. Lots of little fond memories and that’s the essence of Uncle Eddie, whether it is the quick conversations or the moments of need where he was an absolute hero.”

Neil Eddy (WBHS teacher): “When I arrived at Wynberg in grade 8, on my first day, it was your Dad who welcomed me to the school as I was walking in on Aletta Walk. You and he have been around at Wynberg ever since, giving loyal and excellent service, always with a friendly smile and a word of support to make my day better. This place will be quieter without you here, but we will remember you and know that you will watch over us, keeping us stronger for your having been here. Best wishes.”

“Dear Eddie – what a great time we had together at Wynberg hostel. Thanks for all your support throughout. Your handyman skills solved many daily problems. Also thank you for all the golf stories we shared. May you enjoy all that and much more now that you are retired. Much love from Anton & Anne (Grobler – former Littlewood superintendent family) in Almaty, Kazakhstan.”

“You have seen many staff and boys go through Littlewood over the nearly 20 year period, you have worked under 5 or 6 Superintendents, but you have always remained loyal to Littlewood and to Wynberg. I am really so sorry that you will not be able to spend your retirement years playing golf. I’ll remove this part of the message.

“Funny moment: I wish I could have captured it on camera, the look on Eddie’s face when Gillian Gardner, Manager of the hostel, went to Eddie while he was painting a room and asked if she could use some of the paint and a brush … she wanted to paint her car.”

Gavin Samaria (Littlewood Old Boy): “I would just like to wish Uncle Eddie well in all his endeavours after his many years of service to Wynberg brothers. I’m sure everyone only has fond memories of Uncle Eddie, and he has had a positive impact on every boarder that passed through during his tenure. I am very appreciative of everything he has done for me, especially during a time when I felt homesick and he came and spoke to me, it made me feel much better and realise that regardless of my family being back in Namibia I now had a family in the Cape. Mooi gaan, en geniet u ou dae oom Eddie.”

Kalimba Ntinda (Littlewood Old Boy): “Eddie was a true Wynberg/Littlewood soul, who fully embodied the motto Supera Moras. It was always a pleasure having a chat with him in the warm afternoons after school, while he enjoyed his cigarettes. May he retire with happiness and blessings, knowing full well that the Littlewood army is carrying the torch forward. Happy retirement Eddie!”

Tuna Amutenya (Littlewood Old Boy): “There were never dull moments around Eddy, he was a hard-working man that always had a smile. He was easy to talk to and when he shared his life experiences, one always got an appreciation of the privileges of being a Wynberg/Littlewood man.”

Inga Halu (Littlewood Old Boy): “Today we bid farewell to one of Littlewood’s finest, uncle Eddie. This to me is a celebration of the many years of hard work and service to the Littlewood family. It has been a great privilege and an honour to have met you. Over the years, the interactions we had are some of the things that I will treasure for the rest of my life. I went to Wynberg to obtain knowledge from books and my educators, as a bonus I unintentionally received knowledge and skills from the way you behaved and conducted yourself. Having read books and interacted with elders, I learned that life has changed, for better or for worse, in terms of culture and religion.  Despite that, you did not allow yourself to be another person. You are yourself and believe in doing things in an acceptable manner.

“I will never forget in 2017 when the first rugby side was going through a rough patch, you remained positive towards me by offering your advice. After every game on that Monday while I passed the gate on my way to school, I would be greeted and asked what I thought about the team’s performance. This showed how much you cared about Littlewood boys but also the school itself. We had so many conversations about the past, present, and the future of Littlewood. Some of the things I would talk about in my committee meetings were a result of these conversations. I would use the knowledge I received from you to bettering the lives of the boys at the hostel. You are a people’s person, and this made you perfect for Littlewood. I do not recall a day where you were moody or grumpy, you were always friendly towards the boys and I am sure they have their own special memories with you.

“I would like to thank you for the massive impact you have had on Littlewood and the wider Wynberg community. I hope that someday we cross paths to speak about the next chapter in your life. I encourage that you be green and healthy like the gardens you have been taking care of all these years. It is a challenging time as the world is confronted by this monster, Covid-19. During this time, I pray that you and your family remain safe. There are no words to describe the immense impact and contribution you have left at Littlewood.”

Uncle Eddie, I leave you with these quotes:

“Retirement means no pressure, No Stress, No Heartache … Unless you play Golf”.

“May the Greens rise to meet you in the morning, May your swing be true and sweet, May your days be filled with Birdies and Eagles and May the 18th hole bring you much joy and lead you home safely.”

The Littlewood House Family is contributing to a financial gift for Eddie May on his retirement – we welcome all to add to the fund. EFTs may be made directly into the Littlewood account, with the reference “Uncle Eddie”.