Director of Cricket, Mr Andrew Wylie, with our coaches at New Boys’ Nets

It was a great pleasure to welcome so many new boys for 2021 to our ‘meet the coaches’ net session on Friday 27 November. While the lads kept their distance socially, the excitement was shared by all in an atmosphere of enthusiasm, and anticipation of the first term season just over a month away.

While the official league season closed on the weekend with reduced fixtures and disappointing results against SACS, there’s some exciting cricket in the offing this Saturday when Wynberg, Rondebosch, and Bishops meet up in a 3TC series of U19, U15, and U14 matches. 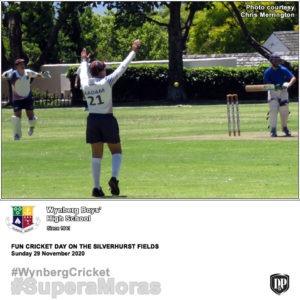 On Sunday 29 November we opened our Silverhurst Fields to boys from around the Western Cape playing in four teams, with two matches each. This was a glorious opportunity for youngsters to get some game time during the Covid-19 pandemic which has so severely restricted youth sport. Wynberg Cricket enjoys close relationships with both the Jacques Kallis Foundation and the Jonty Rhodes Way, whose association with our 1st XI coach, Ryan Maron, and his Cricket School of Excellence, put the event together.

Ryan commented on the day: “We’re grateful to Wynberg Boys’ High for the use of the fields – the day was designed for pure enjoyment, with no winners except the game of cricket, and making new friendships. While the limited number of teams played under strict Covid-protocols, we’re looking to expand this event format to many more teams once social normality returns. It was great to have Mr de Waal drop by to support – I must say that I am thoroughly enjoying my time at WBHS where the vision, the openness, and the desire to ensure the boys have fun learning to become better cricketers, can only benefit them on their way to adulthood.”

11 Players in a squad; 9 on the field at any time. Coloured Clothing / Pink Indwe balls.

A 3TC match is contested between 3 teams of 9 players each. The match is played over 36 overs in two halves of 18 overs with a break at halftime.

Each bowling team has the use of one new ball for their full 12 overs which is used for both opponents. A maximum of three overs per bowler is allowed. An uncompleted overdue to the fall of the 7th wicket is deemed to be completed with dot balls.

Most runs wins Gold, second Silver, and third Bronze. If 2 teams tie with most runs, super overs decide Gold; if all 3 teams tie, all get Gold; and, in a tie for second, Silver is shared. 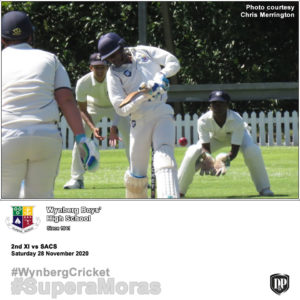 A #WynbergMedia Cricket Update, with thanks to Mr Andrew Wylie and the WBHS Coaches