Friday 18 June 2021: It is with tremendous pride, tinged with sadness, that we announce that our Vice-Principal of Pastoral Affairs, Mr Roland Rudd, has been appointed Headmaster of St Andrew’s School in Bloemfontein. It is full credit to Mr Rudd’s 15 years of exceptional service to WBHS that he has been singled out to lead one of South Africa’s most prominent boys’ schools. 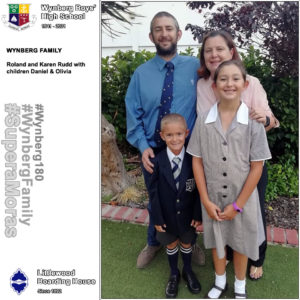 Literally born to teach, Roland grew up at Grey College in the Free State where his father was Deputy Headmaster of Grey College Primary, before graduating with a B.ED degree from the University of the Free State. He arrived at Wynberg in 2006, newly married to Karen, to take up a post in the Engineering Graphics & Design Department and begin his time in Littlewood House as a hostel master, a place he and his wife have along with their children Olivia and Daniel have made not only their home but a home-from-home for hundreds of Littlewood Men over the years.

His sterling years in the classroom and leadership skills saw him a recipient of a Western Cape Education Department Teacher of the Year Award in 2011 and have seen him move swiftly through the ranks from Head of Department, through Head of Wellington (now Oude Wijnberg), and Littlewood Houses to Vice-Principal and member of the Senior Executive, most recently taking on the mantle of Vice-Principal of Pastoral Affairs, managing the staff pastoral portfolio, a vital and all-encompassing task made more so by the stresses of the Covid-19 pandemic.

Thrown in the deep end almost immediately on arrival as Teacher in Charge of Water Polo, one his many legacies is the annual Ian Melliar Cup, our national U15 Water Polo tournament he initiated in 2007 which grew quickly to become the premier schools’ event of its kind in the country. The first schools’ water polo tournament to be played under full FINA conditions using qualified referees in every match, Roland astutely involved our Old Boys’ Union from the outset, enlisted the support of Wynberg Old Boy and top SA Referee, Ian Melliar, and roped in other Old Boys to assist. His innate understanding of the value of an Old Boys’ network to the School was to extend across all his roles throughout his tenure, and when he leaves us he will take with him, and wear with pride, his Wynberg Old Boys’ tie as a full member of the Union. 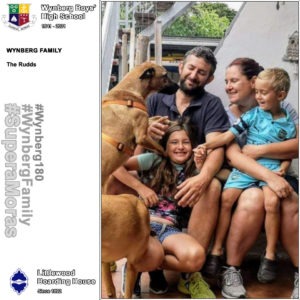 Roland’s passion for soccer was soon apparent and under his guidance, the sport at WBHS has grown not just in numbers, but in incremental levels of success across all age groups year on year since Wynberg re-entered the schools league in 2015. It’s on the soccer field (or the ‘Jacques Kallis Arena’ as the socceristas dub it!) that another of Roland’s initiatives has blossomed and born fruit: the North South Soccer Tournament. Recently part of our Winter Sports Festival along with Rugby and Squash, the scale of the event has escalated along with its popularity and is set to become an annual fixture.

Previously Vice-Principal of Admissions & Boarding, Roland has presided over the gargantuan task of managing the applications process annually, from Open Days to interviews, through liaison with the WCED and feeder schools, to guiding the difficult decisions on final acceptances for prospective new students, but it is probably in his co-role as Superintendent of Littlewood House that he and his wife Karen’s strong family values and deep community commitment were most visibly on display.

Building on a WBHS boarding legacy begun in 1892 and on the good traditions of the past where boarders at Littlewood proudly declare themselves in actions and ethos as the backbone of the school (Firmamentum Ludi), Roland and Karen, and their young family, have been central to a family of housemasters, staff, and young Wynberg Men where compassion, empathy, and personal growth have been central to our boarding ethos, and by example have encouraged an active outreach in service to the broader community.

While there are still some months before the Rudds leave us to begin a new chapter in their lives, we know they will be sorely missed by colleagues, students, and their families alike. We wish them the very best for the future, secure in the knowledge that their new beginnings will be as rewarding to St Andrew’s as their time with us has been to Wynberg.