Saturday 10 February 2018: On Saturday, Wynberg became the first Cape Town school to be invited to play at Randjesfontein against the John Oppenheimer XI (JEO XI). The trip was the culmination of a phone call between Director of Cricket, Andrew Wylie and Craig Lyons and the legendary generosity of the Oppenheimer family in their quest to bring cricket matches to this majestic ground. 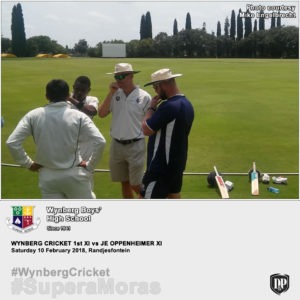 The sprawling Randjesfontein Country estate lies about 25 minutes drive from OR Tambo airport. Owned by the famous Oppenheimer family, it is home to racehorses, stud horses, guest houses, private residences, and the most beautiful cricket ground I have ever had the privilege to visit. The oval has been home to the Nicky Oppenheimer XI (NFO XI) over the years. They have traditionally been one of the warm-up match opponents against touring Indian, West Indian, Pakistan, England, and Australian sides who have toured here ahead of their encounters with the Proteas.

All flights and accommodation were paid for by the family and the catering on the day of the match were such that anyone who walked into the ground to watch was able to tuck into the feast. The outfield of the oval is manicured to perfection.  So similar to a bowling green, it was amusing to see some Wynberg boys staring at it upon arrival before bending down to touch it to see if it was real.   With its tall poplar trees creating a shady boundary on the one side of the ground and given the ovals location in the middle of Midrand bush, one gets the feeling that someone dropped an English county ground into the otherwise African location.

The clubhouse conjures up images of the members stand at Lords, albeit a far more modern design that lends itself to watching cricket on couches 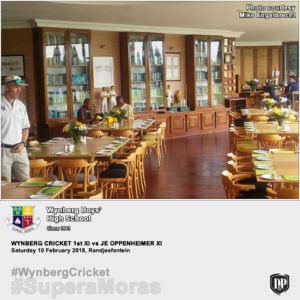 from the open plan lounge/patio downstairs or from the balcony leading off the players’ change rooms.  It was only when play was interrupted by a classic Highveld thunderstorm at about 4 pm that one realized that it took 4 men to push about 60 meters of wood-paneled glass doors into place to keep everyone dry. The clubhouse contains a library of well over 18 000 books – all dedicated to cricket. While going through the shelves, I came across a family photo album containing pictures taken at the match vs Pakistan in 2002. Seeing how the younger and older members of the Oppenheimer family spent the day watching cricket, lounging around the clubhouse with family pets in tow, it reminded me of images of the Kennedys at Hyannis Port in the 1960s. There are paintings and framed photos of famous players and memorable matches – all gifts from touring teams that have played there. There is even a bat once used by WG Grace in one of the display cabinets. 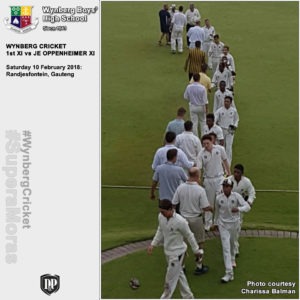 I am glad to say that the match lived up to the surroundings. Wynberg batted first and scored 228/4 in 55 overs.  Matthew de Villiers top-scored with 72 not out. The JEO XI took advantage of short-pitched bowling to race to 59/0 after 13 overs when the thunderstorm arrived around 15:45. Play was only able to resume at 5 pm despite an outfield that had visible puddles on it. The run chase began in a prosaic fashion as Carr, Mingo and Petersen struggled to grip the very wet ball and took most of the pace off it as a result.  However, things soon picked up and it became clear that the game was in the balance.  60 were needed off 5 overs and then suddenly only 8 off the last over. Amazingly the first 3 balls rendered wickets (one run out). The 4th ball went for 6, the 5th for 1, and only 1 was needed off the last ball. With the scores tied, Mingo bowled a wide one and Craig Lyons knicked it to the keeper.  Game over, a draw. But what a finish.

The players were treated to a wonderful supper but not before possibly experiencing their first fines meeting. Post-match speeches were made by the respective captains standing on top of the bar in a time-honoured manner before the day’s exploits and mistakes were unpacked and remedied with down-downs – beer for the JEO XI and coke for the boys.

Hopefully, the boys will have appreciated the weekend as much as the traveling staff did.  For those with aspirations of playing First class cricket, this weekend was certainly a glimpse of what is possible in terms of realizing the fruits of one’s labour – provided that the hard work is put in first.